Note: this page is for 1980s pitcher John Mitchell; for others with the same name, click here. 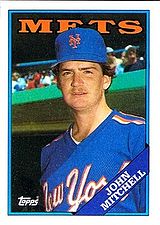 Selected by the Boston Red Sox in the seventh round of the 1983 amateur draft, Mitchell made his pro debut that year with the Elmira Pioneers. Following the season, while on a fishing trip with teammates Scott Skripko and Anthony Latham, the boat on which he was riding sank. He and Skripko were rescued after more than 20 hours at sea; Latham could not swim and died. 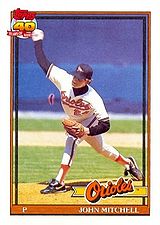 After winning 16 for the Winter Haven Red Sox in 1984 and 12 for the New Britain Red Sox in 1985, Mitchell was traded to the New York Mets in the deal that also brought Bob Ojeda to New York; just a month later, his brother Charlie was also dealt by the Red Sox. With the Tidewater Tides in 1986, he was 12-9 with a 3.39 ERA in 27 starts and was named International League Pitcher of the Year. He earned a September call-up to the Mets and made his big league debut on September 8th, throwing a scoreless inning of relief against the Montreal Expos. He made his first start on September 21st, facing the Philadelphia Phillies, allowing 4 earned runs in 5 innings, and taking the loss.

Mitchell spent much of the 1987 campaign as a member of the Mets rotation, going 3-6 with a 4.11 ERA in 20 games. However, he was back with Tidewater in 1988, making just one late-season appearance for New York. After appearing in just 2 games in the big league level in 1989, he was traded to the Baltimore Orioles following the season. He was part of the O's rotation for much of 1990 and went 6-6 with a 4.64 ERA in 24 appearances.

After playing in the Seattle Mariners chain in 1991, Mitchell did not play the next year. Returning to pro ball, he pitched for in the Red Sox, Texas Rangers, and Montreal Expos chains over the next three summers. He then went on to the independent leagues, joining his brother as a member of the Columbia Mules in 1996 and 1997 and playing for the Newark Bears in the Atlantic League in 1998.

Following his baseball days, Mitchell moved to Nashville, Tennessee. He is married with three children; one of his sons is named Johnny Latham Mitchell in honor of his deceased former teammate.