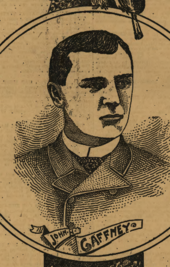 John Gaffney was a major league umpire and manager.

Gaffney was a semipro player (playing briefly in the minors for the 1877 Lynn Live Oaks) who injured his arm while throwing a snowball in the winter of 1879-1880. He then worked as a printer and umpired semipro and college games. In 1884, he joined the Eastern League staff, making the majors in August of that year when he was added to the National League crew. He nearly quit before his first game when he overheard Jack Burdock in the dressing room complaining about the raw umpire brought in. Later that year, John Ward punched Gaffney for calling a game due to darkness, cutting Gaffney above the eye. Ward offered to pay the medical expenses. Foul balls off Gaffney's mask made things worse the next game and he had to leave, his face bloody.

Gaffney was back as an umpire in 1886 when the Washington Nationals hired him as their skipper later in the year. He went 15-25 his first year and 46-76 for the 1887 Nationals. John returned to umpiring in the 1888 AA, helping to introduce the two-umpire system. He started some new practices like calling over-the-fence balls fair or foul based on where they went over rather than where they landed or calling balls and strikes from behind the pitcher when men were on base so as not to sprint to see other close plays. He worked the 1888 World's Series and 1889 World's Series and was the highest-paid umpire in the AA by the end of 1889.

Gaffney remained one of baseball's best-compensated umps when he joined the Players League in 1890 but his stock plummeted after that, perhaps due to drinking. When the PL folded, he worked in the Western Association for most of 1891, rejoining the NL in September. He worked in the 1892 NL and 1893 NL but then began 1894 in the EL, only returning to the majors when Ed Swartwood was canned.

Gaffney returned to the minors from 1895-1898, now reversing his views on the two-umpire system (claiming there were not enough good ones to make it work) or calling pitches from behind the pitcher too readily. He was brought back to the NL in July 1899. His last game came in September 1900, when he ejected Wilbert Robinson over a disputed call at home, ruling Duke Farrell safe. St. Louis had no healthy catchers to replace Robinson, but the injured Lou Criger was getting ready to fill in when Gaffney forfeited the game to Brooklyn.

This biographical article is missing the person's: height weight
This manager's article is missing a managerial chart. To make this person's article more complete, one should be added.
Retrieved from "https://www.baseball-reference.com/bpv/index.php?title=John_Gaffney&oldid=1245815"
Categories: