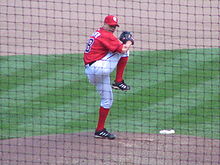 Joey Eischen suffered a serious shoulder injury during the 2006 season that immediately landed him on the 60-day disabled list and effectively brought his career to an end.

It took him quite a while to get established in the majors. He was drafted by the Texas Rangers in the 4th round in 1989, which was actually his second time being drafted, having been a 5th round selection by the Chicago White Sox in the 1988 amateur draft. He did not reach the majors with the majors however, as on July 21, 1991, he was one of three young pitchers traded to the Montreal Expos in return for Dennis "Oil Can" Boyd. Again, he did not reach the big leagues for a few more years, even after putting up some great numbers for a championship team with the Harrisburg Senators of the Eastern League in 1993, when he went 14-4, 3.62 and was named the league's Pitcher of the Year. He made his debut with the Expos on June 19, 1994. In his sole big league outing that season he gave up 4 runs on 4 hits in two-thirds of an inning for an unsightly ERA of 54.00, spending the rest of the season with the AAA Ottawa Lynx. That was also the year he was converted to a relief pitcher after being almost exclusively a starter in his first five professional seasons.

In 1995, the Expos called him up from the minors in May, but before he could take the mound for them, he was traded to the Los Angeles Dodgers on May 23rd along with Roberto Kelly in return for Henry Rodriguez and Jeff Treadway. He pitched well in 17 outings for the Dodgers, putting up an ERA of 3.10 in 20 1/3 innings, but was only used in marginal situations. In 1996, he was traded again, this time at the trading deadline on July 31st, to the Detroit Tigers with P John Cummings in return for OF Chad Curtis. He had gone 0-1. 4.78 in 28 games for the Dodgers, and was 1-1, 3.24 in 24 games for Detroit. He seemed on his way to establishing himself as a reliable left-handed specialist reliever, but he was then traded twice more before the start of the next season, first to the San Diego Padres and then to the Cincinnati Reds, for whom he made his only appearance of the 1996 season, pitching 1 1/3 inning. He then returned to the minors, and had tumbled all the way into the independent leagues when the Expos signed him again in 2000.

Eischen finally made his return to the big leagues on May 11, 2001, and just like his only other appearance for them in 1994, it was a one-off thing, a one-inning stint against the Colorado Rockies in which he gave up a pair of runs. He was immediately sent back down to the minors, and while it was remarkable that he had made it back to the Show after a four-year break, he was already 31 and it looked like he was done. However, the Expos had major pitching problems that year, and he was summoned again at the end of July, and this time he managed to stick. He ended up pitching 24 games and while his record 0-1, 4.85 was nothing spectacular, he was at least retiring major league hitters, something not everyone on that staff could boast about. He got another shot in 2002, and this time he was outstanding, with an ERA of 1.34 in 59 games, a 6-1 record and his first 2 major league saves. And it was not a fluke: over the next three season, 2003 to 2005, he continued to pitch well when healthy (he was limited to 21 appearances in 2004), with ERAs of 3.06, 3.93 and 3.22. This included moving with the team from Montreal to Washington, DC after the 2004 season. However, in his second season with the Washington Nationals, things fell apart, as his ERA had ballooned to 8.59 in 22 games by the time his career was ended by a shoulder injury. But not before in 2005 he had set a record by going five consecutive games without recording a single out from July 6-17. It was a function of being used largely as a LOOGY by that point, and being taken out of the game as soon as a right-handed batter came up, but in previous years, he did have some success against right handed batters as well. This record was later tied by Trever Miller in 2011.

By the end of his career, he had a very characteristic pitching motion, pitching exclusively out of the stretch and making an exaggerated bow towards first base before starting to throw.