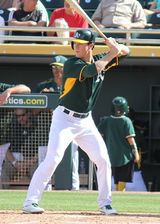 Second baseman Joey Wendle played in the Cleveland Indians minor league system from 2012 to 2014, then was traded to the Oakland Athletics. He was taken by Cleveland in the 6th round of the 2012 amateur draft and signed for a bonus of $10,000.

Joey finally caught a career break on December 11, 2017, when he was traded to the Tampa Bay Rays in return for a player to be named later, who turned out to be C Jonah Heim. In his first ful season in the majors in 2018, he played 139 games for the Rays, batting .300 with 7 homers and 61 RBIs - basically repeating his minor league numbers at a higher level. The Rays liked his versatility that made him fit perfectly in their system composed of various interchangeable parts, the sum always having a greater value that the individual components in true gestalt fashion. That proved to be the case in 2019 when they made the postseason in the absence of true stars on the roster. Wendle had a poor season that year, though, batting just .231 in 75 games and seeing his OPS+ plummet from 118 to 71. He made his first postseason appearances, going 2-for-10 in the Division Series against the Houston Astros. He bounced back in the pandemic-shortened 2020 season, getting his OPS+ back up to 118 as he hit .286 in 50 games (out of a total of 60 played by his team), with 4 homers and 17 RBIs. This time, the Rays made it all the way to the World Series and he saw extensive playing time in the postseason. He was at his best in the Division Series, when he batted .353 (6 for 17) against the New York Yankees, although he batted below .200 in each of the next two rounds, with only a pair of World Series doubles as extra-base hits. The Rays lost to the Los Angeles Dodgers in six games in the Fall Classic. In 2021, he made the All-Star team for the first time, when he hit .265 in 136 games, with 73 runs, 31 doubles, 11 homers and 54 RBIs. His OPS+ was at 110, and he again increased his value with his versatility: over his four seasons in Tampa, he started games regularly at second base, third base, shortstop and left field, providing a lot of flexibility to manager Kevin Cash. The Rays made the postseason for the third straight year after winning 100 games during the regular season, but were upset by the Boston Red Sox in the Division Series. With the Sox using a number of left-handed starters, he saw only limited action, going 1 for 4 with a double.

On November 30th, he was traded by the Rays across the state to the Miami Marlins, in return for OF prospect Kameron Misner. The reasoning for the rays was very clear (and very cynical): he was now eligible for salary arbitration, and they were not willing to pay him what he was actually worth.