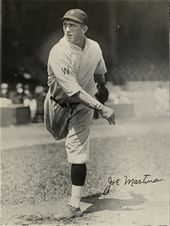 Joe Martina is #2 all-time in career minor league wins, with 349. He is second to Bill Thomas, 383, who never appeared in the major leagues. Martina finally broke into the majors at age 34, but after pitching a scoreless inning in the 1924 World Series, never got another shot in the majors. He is also #2 all-time in career minor league strikeouts with 2770 (behind George Brunet).

While with the Washington Senators, he was two years younger than teammate Walter Johnson.

He got his nickname because his father was an oyster dealer and he also worked in the family business.