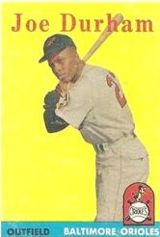 After watching the fleet-footed Joe Durham in action with the 1952 Chicago American Giants of the Negro American League the St. Louis Browns signed him before the 1953 season. The Browns assigned him to the class B York White Roses of the Piedmont League. The 22-year-old outfielder had a solid season, hitting .308 with 14 home runs in 129 games. Joe not only had a good season on the field, his good demeanor on and off the diamond helped break the color line in a league with teams in the segregated states of Maryland and Virginia.

Durham's fine season earned him a ticket to the AA Texas League with the 1954 San Antonio Missions where he played in 161 games, hit 14 homers and had a .318 batting average. Joe's performance earned him a late-season call-up to the Baltimore Orioles (where the Browns had moved after the 1953 season), becoming the second African-American to play for that franchise. On September 12, 1954, Joe entered the record books again when he became the first African-American to hit a home run for the Orioles.

Durham then spent the next two years (1955 and 1956) with the United States military during the Korean War. Joe returned in time for the 1957 season, reporting to the San Antonio Missions and taking up right where he had left off, hitting .391 in 50 games. He went back to Baltimore for the rest of the season where he appeared in 77 games and hit .185. He was with the Pacific Coast League Vancouver Mounties in 1958, hit .285 with 18 homers and on December 1st he was drafted by the St. Louis Cardinals from the Orioles in the 1958 Rule V Draft.

In 1959 Joe appeared with the Cardinals, getting in six games, mostly as a pinch hitter, and finished up his three-year major league career, appearing in 93 games and hitting .188. He spent the rest of the year with Vancouver, hitting .286 and was with the same team again in 1960, hitting .273.

Durham was in the International League with the Richmond Virginians and the Rochester Red Wings for the next four seasons (1961-1964), finishing out his ten years in the minor leagues, hitting .239 for Rochester in 1964. The 32-year-old outfielder had put up some good figures during his playing days, appearing in 1,167 contests with 3,970 at bats and 1,147 base hits, including 113 home runs, for a .288 career batting average.

A salesman for the Churchill Liquor Distributors in the Baltimore, MD area for many years, Joe pitched batting practice for the Orioles for several seasons. In 1987 he was named the team's Community Coordinator of baseball operations. He also spent some time as a coach for the Hagerstown Suns in 1990-1992 and Frederick Keys in 1993-1995.

Durham, who lived in Maryland, retired and served as an Orioles Baseball Club representative until his death in 2016.