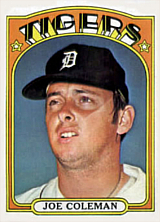 Coming to the Detroit Tigers as a key part of the blockbuster Denny McLain trade in 1971, the fiery Joe Coleman was an outstanding pitcher in the Motor City, winning 62 games over a three-year span and logging over 280 innings for four consecutive years from 1971 to 1974. He worked quickly on the mound, limiting his pitches to a few seconds apart, with a live fastball being his main calling card. Coleman played fifteen seasons in the big leagues, twice winning twenty games and three times striking out more than 200 batters for the Tigers during his five-year tenure. The son of former big league pitcher Joe Coleman, Sr. and father of big league pitcher Casey Coleman, he was the first player ever signed after being the third pick of Major League Baseball's first amateur draft in 1965 by the Washington Senators. He was also the first drafted player to reach the majors when he joined the Senators that September at 18. Coleman's first baseball card appearance was in the 1966 Topps set.

After his playing career ended, Coleman coached and managed in the minors for several seasons. He was a player/coach for the Spokane Indians in 1980 and 1981. He was the manager of the Peoria Suns in 1983 and the California Angels bullpen coach from 1988 to 1990. Coleman was Joe Torre's pitching coach with the St. Louis Cardinals from 1991 to 1994. He returned to the Angels organization as a minor league pitching instructor from 1995-1996 and a coach on the big-league staff from 1996 to 1999. From 2000 to 2006, Coleman served as the pitching coach for the Durham Bulls. From 2007-2011, he was the pitching coach of the Lakeland Flying Tigers. He moved to the Miami Marlins' organization as pitching coach of the Jupiter Hammerheads between 2012-2015.