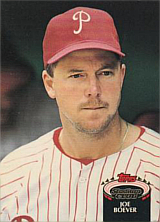 Pitcher Joe Boever played for seven teams over a dozen seasons in the majors, appearing in 516 games.

Undrafted out of college, Boever signed with the St. Louis Cardinals organization in 1982. The following year, he recorded 26 saves for the St. Petersburg Cardinals. He reached the majors with St. Louis in 1985 and appeared in 24 games over two seasons with the club. He began 1987 with the Louisville Redbirds and led the American Association with 21 saves before being traded to the Atlanta Braves for Randy O'Neal in late July. He spent most of the next year back at AAA with the Richmond Braves and led the 1988 International League with 22 saves. Boever was Atlanta's closer in 1989 and saved 21 games. Midway through the 1990 season, he was dealt to the Philadelphia Phillies for Marvin Freeman, and he recorded 14 saves between the two clubs that year. Moving on to the Houston Astros as a free agent in 1992, he posted a 2.51 ERA and led the National League with 81 appearances. He ended his career with uneventful stints with the Oakland Athletics, Detroit Tigers and Pittsburgh Pirates, making his last appearance in 1996.

Following his playing days, Boever was pitching coach for the West Michigan Whitecaps in 1999. He held the same role for the Lakeland Tigers in 2000, 2001 and again in 2003.