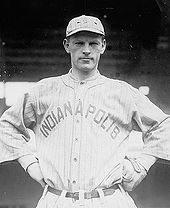 Jimmy Esmond played four seasons in the majors, of which two were for the Cincinnati Reds in the National League and two were with a couple of teams in the Federal League. After the demise of the Federal League, he was taken back by Cincinnati, but became ill and didn't play pro ball in 1916 or 1917. The minor league database shows him playing semi-pro ball from 1918-1920 and then he returned to minor league play from 1921-1924. He had originally broken into pro ball at age 18 in 1908.

Jimmy was a workhorse in the Federal League, getting over 600 plate appearances both seasons. He led the league in triples in 1914.

"One thing is sure, that in Jimmy Esmond, who comes back, the team will gain a snug fielder. Until Tinker arrived it was Esmond who came nearest to filling Tom Corcoran's shoes at short than any . . . successors. Esmond was a bit weak with the old hickory . . . Redland always liked Es­mond . . .Sporting Life's Cincinnati correspondent, February 19, 1916

"There's a whisper heard in Redland that Jimmy Esmond is coming back. You know he was on the list last Spring, but he was full of malaria or something of the sort and never did show up." - Sporting Life, November 18, 1916