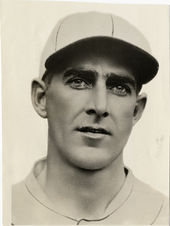 After cups of coffee with the Boston Red Sox in 1917 and the New York Giants in 1919, Cooney spent several years in the minors with the Milwaukee Brewers, rapping 12 consecutive hits in 1923. He was back in the majors with the St. Louis Cardinals in 1924, enjoying his best season by hitting .295 as the double play partner of Rogers Hornsby. He played 54 games for the Cards in 1925, hitting .273, then was the starting shortstop for the Chicago Cubs in 1926, following in his father's footsteps, when he played 141 games and batted .288. On May 30, 1927, he turned an unassisted triple play against the Pittsburgh Pirates, retiring the Waner brothers and Clyde Barnhart. Just a week later, he was traded to the Philadelphia Phillies with Tony Kaufmann for pitcher Hal Carlson. He hit .242 in 33 games for the Cubs and improved to .270 in 70 games for the Phils. But he had very little power and did not draw any walks, so his batting averages were really his only contribution on offense; his career OPS+ is only 67. He closed his major league career as a backup with the Boston Braves in 1928.

He was the son of Jimmy Cooney (who was also a major league shortstop) and the brother of Johnny Cooney. He lived in Naragansett in later life for 25 years. Cooney lived to 96, and his 1991 AP obituary remembered him primarily for his triple play.