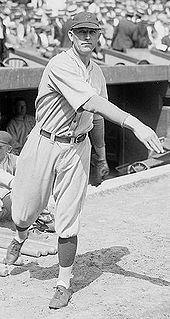 Pitcher Hal Carlson began his career by playing in the Three-I League and the Texas League. He spent his first seven seasons in the majors with the Pittsburgh Pirates, from 1917 to 1923, but had his greatest success with the Philadelphia Phillies from 1924 to 1927. In 1925, he led the National League with four shutouts, and the next season, he posted 17 wins. He was traded to the Chicago Cubs in mid-year 1927, and despite his advancing age, still saw significant time starting and relieving.

In 1928, Carlson suffered a severe case of the flu that caused him to retire for several months. He came back to the Cubs and continued to play. He was scheduled to pitch for the team on May 27, 1930, but the game was cancelled due to rain. Early the next morning, he suddenly fell ill in his hotel room, and later that day he died of an internal hemorrhage at age 38.