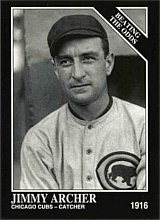 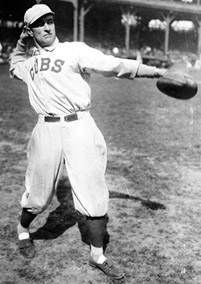 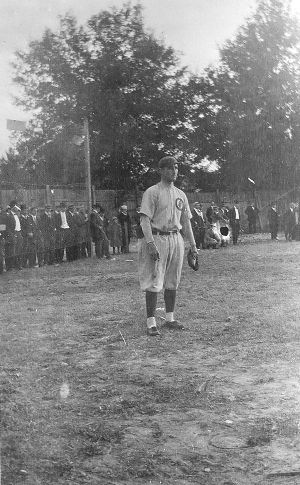 "The best throwing catcher of them all was Jimmy Archer of the Cubs. He didn't have an arm. He had a rifle. And perfect accuracy." - Chief Meyers, to Lawrence Ritter in the 1966 classic The Glory of Their Times

Irish-born catcher Jimmy Archer played a dozen seasons in the majors and was best known for his strong throwing arm. While he was born in Ireland, his family moved to Canada when he was young and he grew up in Toronto, ON. Prior to his baseball days, Archer severely burned his right arm in an accident while working in a factory. After his injury healed, the muscles in his arm shortened but became stronger.

Archer earned his first cups of coffee in the majors with the 1904 Pittsburgh Pirates and the 1907 Detroit Tigers but failed to hit .200 in each of the years. He joined the Chicago Cubs in 1909 and saw considerable playing time behind the plate for them through 1916. After splitting the 1918 season between the Pirates, Brooklyn Dodgers, and Cincinnati Reds, he retired.

Following his playing days, he became a hog purchaser for the Armour meat packing company. In 1931, Archer saved the lives of two men who had been overcome by carbon monoxide while in the cab of a truck, receiving a medal from the National Safety Council. He died in March 1958 following treatment for spinal tuberculosis and was inducted into the Canadian Baseball Hall of Fame in 1990.