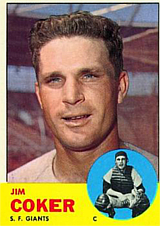 A star at Furman, Jimmie Coker signed with the Philadelphia Phillies on February 19, 1955. A catcher by trade, he spent his first season with the Class D Mattoon Phillies, appearing in 124 games, hitting 13 home runs and batting .324. Jimmie spent the next three seasons in the high minors, building a reputation as a good defensive catcher with a strong throwing arm. He slugged 38 homers and hit .252 in this span. He got his first look at the major league game with a late-season call up by the Phillies in 1958, appearing in two games with six at bats.

Coker was up and down between the Phillies and Buffalo Bisons between the 1958 and 1962 seasons, mostly as a backup when in the majors. In 1960, despite a meager .214/.289/.329 line in 81 games, he was named catcher on the Topps All-Star Rookie Team. The year would prove his most substantial as a big leaguer. On November 21, 1962, he was purchased by the Baltimore Orioles; before the ink was dry on the agreement, the Orioles traded him, along with Jack Fisher and Billy Hoeft, to the San Francisco Giants for Stu Miller, Mike McCormick and John Orsino. Jimmie got very little playing time with the Giants in 1963 and wound up with the Cincinnati Reds in 1964, where he spent the last four years of his career as an irregular.