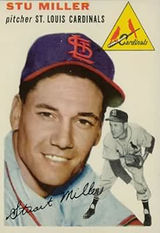 "He had three speeds for his pitches: slow, slower, and slowest." - Milt Pappas Out at Home

"....I still don't see how Stu Miller threw the ball that soft and got it to home plate." - Frank Robinson

Pitcher Stu Miller has a long, successful career, but to many, he is best remembered for committing a famous balk in the All-Star Game.

Miller began his pro career in 1949, following a stint in the Navy. That summer, he went 8-13 with a 4.29 ERA for the Salisbury Cardinals, leading the Eastern Shore League in losses. The following year, he improved to 16-13 with a 3.21 ERA for the Hamilton Cardinals but led the PONY League in losses. After going 11-5 with a 2.34 ERA for the Columbus Red Birds in 1952, he earned a call-up to the majors. In his debut with the St. Louis Cardinals, on August 12th, he threw a six-hit shutout against the Chicago Cubs, and he went an impressive 6-3 with a 2.05 ERA in 12 outings for St. Louis. However, he struggled the next two seasons, posting Earned Run Averages well over 5.00, and he was soon back in the minors.

Miller was back in the majors with the Cardinals to start 1956, and early in the season, he was dealt to the Philadelphia Phillies along with Harvey Haddix in a five-player trade. After that season, he was traded again, this time to the New York Giants for Jim Hearn. He soon found success with the Giants, and led the National League with a 2.47 ERA in 1958 (the team's first year in San Francisco). After splitting time between the rotation and the bullpen, he pitched exclusively in relief starting in 1961, and that year, he was selected to the All-Star Team. Pitching in the first of two All-Star Games that year, he was blown off the mound by strong winds at San Francisco's Candlestick Park. A balk was called, and Al Kaline eventually scored the tying run for the American League. However, the NL came back, and Miller earned the win. He ended the year with a league-leading 17 saves and was named Fireman of the Year by The Sporting News. He saved 19 the next summer and saw the only postseason action of his career, making two appearances in the World Series against the New York Yankees.

Following the 1962 season, Miller was traded to the Baltimore Orioles. In his first year with the O's, he led the AL with 71 appearances and a career-best 27 saves, and once again was named Fireman of the Year. He pitched effectively for Baltimore through 1967, and on April 30th of that season, he relieved Steve Barber to be a part of the first combined no-hitter in the majors in 50 years. He ended his career with the Atlanta Braves in 1968.