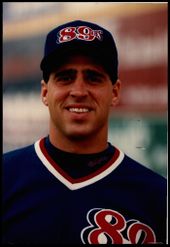 Although he never managed to hit above .250 in a minor league season, he still managed to make it to the major leagues. He made his big league debut on April 9, 1992. He had only one at-bat in that game, grounding out against Ben Rivera of the Atlanta Braves. He hit .216 with 1 home run and 9 RBI in his first big league season. In 74 at-bats, he struck out 25 times while walking only 6 times. He also spent some time with Phoenix in 1992, hitting .209 in 67 at-bats.

He was granted free agency in October of 1992 and signed by the Florida Marlins. However, the Giants bright him back immediately by drafting him in the 1992 Rule V Draft in December of that year.

McNamara spent most of his 1993 season with Phoenix, where he hit .196 in 158 at-bats. He appeared in 4 major league games that year, collecting 1 hit in 7 at-bats for a .143 batting average. He played his final big league game against the Los Angeles Dodgers on July 28th. He was granted free agency by the Giants in October and signed as a free agent with the Texas Rangers in November.