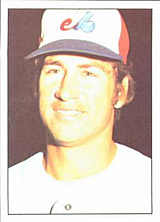 Jim Cox was the second player taken in the secondary phase of the January 1972 amateur draft by the Montreal Expos. He was drafted twice earlier, by the Washington Senators in the 24th round of the 1968 draft and by the Cleveland Indians in the secondary phase of the of the 1971 draft, before accepting the Expos' offer. He earned a Bachelor of Science degree in microbiology from the University of Iowa. Cox shined with the Hawkeyes. In 1970, he was chosen as the first baseman on the Big Ten second All-Star team. In 1971, he made all-Big Ten first team as second baseman and was a second team All-American. He also played basketball while in college.

Cox made an impression in spring training 1972 and jumped to Double A as the regular second baseman with the Quebec Carnavals of the Eastern League. Cox was second on the team in homers (11), RBI (58) and walks (58). He hit .255 in his only season in Double A. In 1973, with the Triple A Peninsula Whips, his numbers were slightly better, hitting .267 with a .353 OBP, second on the team behind Jerry White. He was called up in July, making four starts before the Expos sent him down for the rest of the season. He was named to the International League postseason All-Star team at second base. At that point, he was considered highly by Expos manager Gene Mauch.

As the Expos moved Ron Hunt from second to third base in 1974, there was an opening at second. After a good winter season with Lara in the Venezuelan League and a strong spring training when he was named the best rookie in camp, Cox won the regular job over his shortstop partner in Quebec and Peninsula, Larry Lintz. On Opening Day, against the Pittsburgh Pirates, he went 2-for-6 with a run scored and 3 RBI; his 13th-inning double off Ramon Hernandez drove in the winning run in an epic 11-8 win. But Cox struggled offensively and, in early July, he was sidelined with a broken hand. He eventually lost the starting job to Lintz, who, although not much more of a hitter, had tremendous speed. Cox played in Triple A upon his return, playing 32 games with the Memphis Blues and batting .252 with a .341 OBP. He was recalled in September and played a bit more after the Expos traded Hunt to the St. Louis Cardinals. Overall, his offensive line in the majors was .220/.288/.292. Most of his playing time came in that 1974 season, as he had 236 of his 307 career at bats.

The Expos traded for a new second baseman before the 1975 season, Pete Mackanin, and Cox failed to make the team out of spring training. He played the whole season in Memphis, hitting .264 with 48 walks and 11 home runs in 135 games. He was recalled in September, playing 11 games and hitting .259 with one home run. With Mackanin established as the regular second baseman, Cox began 1976 in the minors and, after a strong start with the Denver Bears, was called up in early June. In his first game back, he got three hits in a rare Expos win against the Pirates. But like the rest of the team, he struggled the rest of the month, with only two hits in his next 25 at bats, his last in the big leagues. He was sent back to Denver in July, never to return after the Expos acquired veteran Wayne Garrett to share second base with Mackanin.

Cox played the next three seasons in Denver, where he was mostly used as a third baseman. He retired prior to the 1978 season, only to be reinstated in June. His last year, in 1979, was his best statistically in Denver, with a career-best .305 average, 12 home runs and 77 RBI.