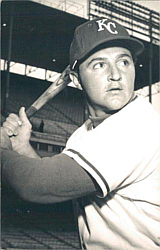 Jim played parts of six seasons in the majors as a backup catcher, but never hit much: his career batting average was .147. He hit better in the minors. As a 19-year-old playing for the Salem Dodgers, he hit .302, highest on the team and beating out the 21-year-old Jim Lefebvre. He followed that up by hitting .301 the following year for Salem. In 1972, he hit .293 for the Sherbrooke Pirates and was second on the team with 16 home runs. In 1973, with the Charleston Charlies, he hit .304, a bit behind Dave Parker's .317, and Jim's 18 home runs were second on the team behind Tony Solaita.

Jim attended Fullerton Union High School, a school previously attended by two Hall of Famers, Walter Johnson and Arky Vaughan. Another alum, Del Crandall, was much older than Jim but still playing in the majors (his last year) when Jim broke in. "Tricky Dick" Nixon also went to the same high school for a while but graduated from a different one.