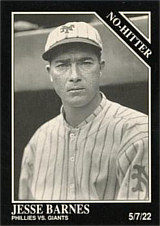 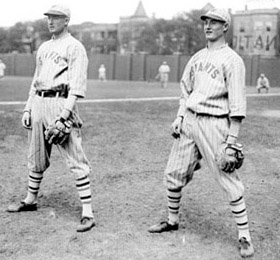 Pitcher Jesse Barnes played more than a decade in the majors and led the National League in wins once and losses twice.

Barnes began his big league career with the Boston Braves in 1915 and led the NL with 21 losses in 1917. Before the next season, he was traded to the New York Giants and his fortunes immediately improved. He led the NL with 25 wins in 1919 and had another 20-win season the next year. In 1921, he won 2 games in the World Series en route to a Giants championship. The next season, on May 7, 1922, he threw a no-hitter against the Philadelphia Phillies. In early 1923, Barnes was traded back to the Braves, and in 1924, he once again led the NL with losses with 20. He ended his playing days with two years with the Brooklyn Robins in 1926 and 1927.

Barnes was the older brother of pitcher Virgil Barnes, who was his teammate with the Giants. After Jesse was traded away, the brothers faced one another 10 times. A third brother, Clark Barnes, pitched in the minor leagues in the 1920s [1].