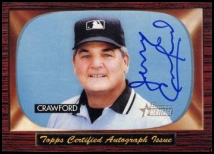 Jerry Crawford was a big league umpire from 1976 to 2010. He holds the record, shared with Bruce Froemming, for working the most postseason games - 111.

Crawford attended umpire school in 1967 and began his career that year in the New York-Penn League. He moved to the Florida State League in 1970, after missing two seasons while he was in the military. He moved to the Carolina League in 1971, the Eastern League in 1972, and the International League from 1973 to 1975. Crawford made the National League staff in 1976 and umpired his first major league game that year. He rose to the rank of crew chief and retired prior to the 2011 season. By that point, he had become the majors' longest-serving umpire, with 4371 regular-season games under his belt. He was also the head of the World Umpires Association. His 33 seasons as a major league umpire were only 4 years shy of the record held by Froemming and Bill Klem.

Crawford has worked in the postseason 17 times including 10 times in the League Championship Series and 5 World Series, thus accumulating the record-tying 111 games. He also worked the 1989 and 2006 All-Star Games, the latter as home plate umpire.

The Crawford family has contributed greatly to officiating in two sports. In addition to Jerry Crawford and his thirty seasons, his father Shag Crawford was a National League umpire from 1956 to 1975 and his brother Joe is a well-respected NBA referee. Both Jerry and Shag Crawford spent over a decade on the same umpiring crew as Hall of Fame umpire Doug Harvey.

Jerry was the second base umpire in the 1999 movie For the Love of the Game.