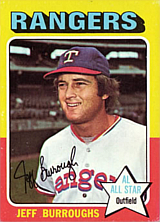 "My first actual workday of 1975 involved writing an in-depth feature about Jeff Burroughs, fresh from his 118 RBI season, and the interview was conducted at poolside. My operational plan for the spring was concentrated around avoidance of conventional baseball jive and allowing my readers to become acquainted with their new Ranger heroes on a more personal basis. So I decided to ask Burroughs questions that might be a little out of the ordinary, such as: 'Jeff, there was an article in the paper this morning that contained some comments from a professor at Nova College over in Fort Lauderdale. This professor predicted that, because of world hunger and the world energy crisis, a hundred years from now, through the miracle of genetic engineering, the average American male will be fourteen inches tall. How do you feel about that?' Burroughs didn't hesitate. 'Huh. I guess they'll have to shorten the foul lines and bring in the fences, he said.'" - Mike Shropshire, from Seasons In Hell

Jeff Burroughs played 16 years in the major leagues. He's best known as the 1974 American League MVP. He also led the National League in on-base percentage in 1978.

Jeff was born in Long Beach, CA, attending high school and college there. Bobby Grich, born two years earlier, attended the same high school as Jeff. Drafted by the Washington Senators with the first overall pick in the 1969 amateur draft, he played in the minors from 1969 to 1972, showing power each year. Most of that time (1970-1972) was spent at Triple A with the Denver Bears. When he signed with the Senators, he reportedly had a clause put in his contract that no matter what, his parents were not to get any of his money under any circumstance.

Beginning in 1970, at age 19, he spent part of each season at the major league level. With the Senators in 1971 he had over 200 plate appearances, posting an OPS+ of 99. He finally became a regular in 1973, after the team had become the Texas Rangers, and hit 30 home runs, one of which, on July 26, was the first grand slam in the Rangers brief history. In 1974, he hit .301 with 25 homers and an AL-leading 118 RBI for the surprising Rangers. After his MVP season, he had some other notable years. In 1975, his 29 home runs were fifth in the American League, although he was also the league leader in strikeouts. In 1977, after being traded to the Atlanta Braves for five players, he was second in the National League with 41 home runs, behind only George Foster, who hit 52 that year. In 1978, he led the NL in walks (117) and OBP (.432), hitting .301 for the second time in his career. In the last seven years of his career, he never had as many as 500 at-bats in a season, maxing at 401 in 1983 when he was a member of the Oakland Athletics. His final appearance came as a pinch-hitter for the Toronto Blue Jays against the Kansas City Royals in the 1985 ALCS; it was the only postseason appearance of his career.

Jeff is the father of Sean Burroughs and coached Sean's team in the 1992 and 1993 Little League World Series; they were the first US team to win back-to-back titles. Chase Utley's official site [1] says that Jeff was his manager when Chase played Little League in Long Beach.