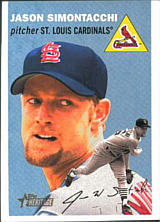 He was pitcher of the year in 1998 for the independent Frontier League champions, the Springfield Capitals, going 10-2 with an ERA of 2.95. He also played in the Italian League in 2000, where he played well enough to make the roster for Italy at the 2000 Sydney Olympics.

He had an ERA of 2.34 and a record of 5-1 in 2002 for the Memphis Redbirds, a year in which he was mostly up with the St. Louis Cardinals as a 28-year-old rookie. Through his first 13 starts with the Cardinals, he went 7-1 with a 2.82 ERA. Simontacchi suffered right shoulder problems from a torn labrum in 2004, and was released by the Cardinals at the end of the year and he missed the 2005 season.

Simontacchi considered playing for Italy at the 2006 World Baseball Classic but did not. He signed a minor league deal with the Chicago Cubs for the 2006 season but his contract was voided. He pitched 10 games in the independent Atlantic League for the Bridgeport Bluefish with an ERA of 0.84.

In 2007, he was a non-roster invitee by the Washington Nationals in spring training and started the season on the disabled list with a groin injury. He made 13 starts for the Nationals in 2007 and received a decision in each of them. He ended the season with a 6-7 record.

Simontacchi pitched in 7 games for the Long Island Ducks of the Atlantic League in 2008. He was pitching coach of the Peoria Chiefs in 2013-2014 and Springfield (MO) Cardinals in 2015-2017. In 2022, he was the minor league pitching coordinator for the Kansas City Royals.