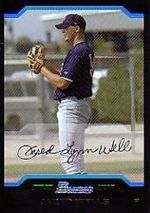 Jared Wells made his major league debut with the San Diego Padres in 2008, then finished out the year with the Seattle Mariners after being traded on May 28th. It was his lone season in the majors.

Wells tied Michael Ekstrom for the most wins by a Padres farmhand in 2005. He was 11-3 with a 3.44 ERA for the Storm, walking only 26 in 120 1/3 IP and then 2-5, 4.40 for the Mobile BayBears. Wells led the high-scoring California League in ERA, .44 ahead of the runners-up. He was named to the league All-Star team and also won Pitcher of the Year honors. He pitched for Team USA in the 2005 Baseball World Cup, going 2-0 with a 1.64 ERA, but his stats were probably inflated by his facing only Spain and the Czech Republic, two of the weakest teams. Wells was named the Padres Minor League Pitcher of the Year.

Wells' problems continued in 2007 - he was 3-7 with a 5.24 ERA and nine saves for Portland and had been moved to the bullpen. He started 2008 with a 1-1, 5.85 record and nine saves in 19 games for Portland but was called up to San Diego when the last-place club shook up its roster. He debuted in the majors on May 24 against the Reds. The 26-year-old relieved Mike Adams in the 7th inning with a 5-2 lead. He got Joey Votto on a fly and David Ross on a grounder. Wells walked Bronson Arroyo and allowed a Ryan Freel single before retiring Paul Janish to end the frame. Tony Clark pinch-hit for Wells in the bottom of the inning. He was traded to the Seattle Mariners less than a week later in return for Cha Seung Baek. He was briefly up with the Mariners in August, taking Erik Bedard's spot on the roster, then was sent down when Felix Hernandez came off the disabled list a few days later, and came back for good when rosters expanded in September.