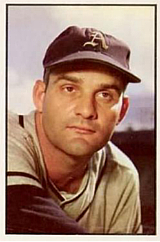 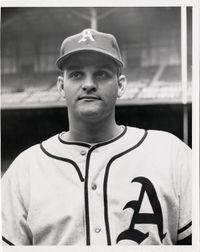 Harry Byrd was the 1952 American League Rookie of the Year with a record of 15-15 for the Philadelphia Athletics (his 15 wins were seventh-best in the league). He one-hit the New York Yankees on September 3rd, allowing just a double to Irv Noren in a 3-0 victory at Shibe Park.

Harry promptly fell victim to a sophomore slump in 1953, when he went 11-20 to lead the league in defeats. To his credit, he also led the league in games started with 37, working well over 200 innings with a 5.51 ERA. The defending five-time World Champion New York Yankees felt Harry could be the guy to replace one of their aging mound stars and he was acquired as part of one of the Yankees numerous multi-player swaps with the A's in December. He pitched reasonably well, with a 9-7 record and 3.00 ERA in 1954, but has the distinction of wearing a Yankee uniform in the only season between 1949 and 1958 in which they failed to capture the pennant.

Byrd was next involved in the blockbuster 18-player Largest Trade in Baseball History between the Yankees and the Baltimore Orioles in the winter of '54, which brought "Bullet" Bob Turley and Don Larsen to New York, moving on to the Chicago White Sox and Detroit Tigers as well through [[1957 Tigers|1957]. He finished in the majors with a record of 46-54 and a 4.35 ERA. In the minors for parts of twelve seasons between 1946 and 1961, he was 123-130 with a 4.28 ERA.