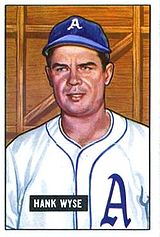 Hank Wyse, pitcher for the Chicago Cubs, injured his back when he fell off a welding platform while working in a war plant at Miami, OK during World War II. X-Rays revealed no serious damage to the spinal region and it wouldn’t handicap his baseball career. The right-hander from Arkansas was 4-F during the war because of the injury which forced him to have to wear a corset when he pitched.

The stocky pitcher had signed with the Chicago Cubs as an amateur free agent before the 1940 season and spent his first season in pro baseball with the Moline Plowboys of the class B Three-I League and the Tulsa Oilers of the Texas League finishing the split season with a 10-9 record and a 4.93 ERA.

Wyse went 9-7 for the Cubs in 1943 and won 16 but lost 15 in 1944, while pitching 257 innings. It had been well over a half century since the Chicago Cubs had won a pennant, and the top winner for the 1945 National League pennant-winning Cubs team was 22-game-winner Henry Washington Wyse. The Cubs had a 98-56 record and held on to beat the second-place [1945 Cardinals|[St. Louis Cardinals]] by a three-game margin.

The Cubs hooked up against the Detroit Tigers in the 1945 World Series and Hank started the second game against the Tigers, pitching 6 innings, giving up 5 hits and 4 runs as the Cubs lost, 4-1. Hank also made brief appearances in Games 6 and 7 but in a losing cause as the Tigers would go on to victory in the series, 4 games to 3. As he was the last man to take the mound in Game 7, he was the last player to pitch for the Cubs in the World Series until they made their triumphant return in 2016.

Wyse spent three more years in the minors with the Kansas City Blues of the American Association in 1951, the Beaumont Roughnecks in the Texas League in 1952 and finishing out with the Tyler East Texans of the Big State League in 1953. Wyse had a great minor league run, going 115-69 and a 3.17 ERA while pitching 1,495 innings.

In an interview for Oldtyme Baseball News prior to his death on October 22, 2000, at age 83 in Pryor, OK, Hank said: "I guess I'm considered a war time player, but I think I did pretty well in '46 when all the guys were back."