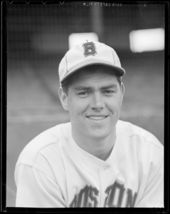 Hank Majeski set an American League record for third basemen in 1947, when he posted a .989 fielding percentage while playing for the Philadelphia Athletics. He had his best season at the plate the next year, 1948, hitting .310 with 120 RBIs for the Athletics. In 1954, he was a member of the Cleveland Indians and hit a pinch home run for the club in that year's World Series.

On August 3, 1936, he collected seven hits in seven at-bats, including 3 singles , 2 doubles, a triple and a homer for the Eau Claire Bears. The Bears managed 34 hits in the game, which became the all-time Northern League record.

After retiring as a player, he coached at Wagner College and was a scout for several teams. Majeski died of cancer at the age of 74 in 1991.

Hank's name, as Heenie Majeski, is the first cited by David Frishberg in the song Van Lingle Mungo, whose lyrics consist almost entirely of the names of ballplayers from the 1940s.