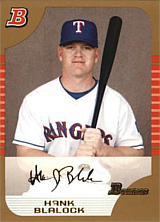 Hank Blalock was a third baseman who started a promising career with the Texas Rangers in 2002, but was set back by injuries in following years. Hank led all American League third basemen in home runs, hits, RBI, extra-base hits and total bases from 2003 to 2005. He played in the All-Star Game the first two of those years. In the 8th inning of the 2003 Midsummer Classic, Hank's home run off lights out Los Angeles Dodgers closer Eric Gagne provided the margin of victory in the American League's 7-6 triumph. His last full-time season was 2006 with Texas. The following season, he underwent surgery for thoracic outlet syndrome and was never the same player. The emergence of Chris Davis eventually led to his becoming redundant and he finished his career after catching on briefly with the Tampa Bay Rays in 2010.

His brother, Jake, also played in the Rangers' system but never reached the major leagues.