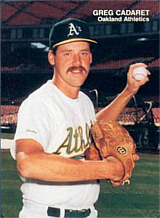 Greg Cadaret was signed as an 11th round pick in the 1983 amateur draft by the Oakland A's and scout Frank Franchi. On the heels of his finest big league season (5-2, 2.58 ERA, 64 strikeouts in 71 2/3 innings in 1988) and off to a 2.28 ERA in 26 games in 1989, he was one of three players traded to the New York Yankees on June 21, 1989, in return for superstar Rickey Henderson; the others were Eric Plunk and Luis Polonia. Mainly a relief pitcher with a stout fastball, he struggled with control problems most of his career, and never was more than a marginal pitcher in the bigs thereafter. Cadaret played for 8 different teams in a span of 10 years, with his most solid season after his promising start coming in a 68 game 1991 in New York, going 8-6 with a 3.62 ERA and 105 strikeouts in 121 2/3 innings. He capped his career with a stint with the Texas Rangers in 1998, finishing with 451 appearances and a 38-32, 3.99 record.

After his playing career ended, Cadaret stayed active in baseball in a variety of roles. He had moved to Redding, CA in 1994 and he returned to this area. His coaching endeavors included:

Notes: It is unclear if Cadaret worked full-time as a Simpson University assistant coach or just part-time. In 2009, the Outlaws fired Cadaret on July 24th and replaced him with hitting coach Kory DeHaan.

In 2011-2012 Cadaret worked as a baseball analyst with the Oakland Athletics for their pre-game and post-game broadcasts.

Greg grew up and and attended school in the small town of Stanton, Michigan.