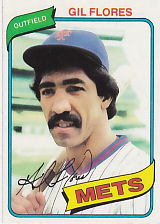 Gil Flores played three years in the majors and thirteen in the minors, including six years with the Tidewater Tides and parts of three with the Salt Lake City Gulls.

Gil was an excellent runner and minor league base stealer with nearly 300 thefts there. He also had a knack for hitting .300 or higher - in his three seasons with Salt Lake City, he hit at least .320 each time (although it was a high-average team in general). Not much of a home run hitter, his highest total in the minors was 4; as for doubles, he hit more (19) with the California Angels in 1977 than he did with any minor league team.

Per Dennis Eckersley [1], Flores was the last out in Eckersley's 1977 no-hitter.

Flores played for the Ponce Lions in the Puerto Rico Winter Baseball League.