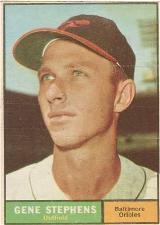 Outfielder Gene Stephens was signed as an amateur free agent by the Boston Red Sox before the 1951 season. While his brirthplace is listed in most sources as Gravette, AR, he was actually born in the nearby small town of Hiwasse, AR. The 6' 3" 18-year-old was assigned to the High Point-Thomasville Hi-Toms of the North Carolina State League for his initial season. The young man had as good a first year as could be had, playing in 122 games, hitting 22 homers and carrying a .337 batting average. These numbers earned him an outfield spot on the league All-Star team.

Gene got his first look at major league pitching in 1952 when the Red Sox gave the left-handed hitting outfielder an opportunity; he appeared in 21 games, hitting at a .226 clip. He was also with the Louisville Colonels and the Albany Senators that season, appearing in 95 games and hitting for a combined .244 average. Just about the same action would take place in 1953, with the exception that on the night of June 18th, in a game with the Detroit Tigers, he was in the starting lineup and became the first American League player (and the only one in the 20th Century) to record three hits in a single inning when the Red Sox scored 17 runs against Detroit in the 7th inning. He had two singles and a double. Johnny Damon was the next major leaguer to record a three-hit inning, also for the Red Sox, in 2003.

Gene, who was a long-time backup player for the Red Sox, was often used as a defensive player for Ted Williams and came to be known as Williams' caddy, with a striking physical resemblance to Williams due to his long, lanky frame. Stephens hit .293 in 109 games in 1955 and moved into the starting lineup after Jimmy Piersall was traded, but was set back by a fractured wrist he suffered early in the 1959 season, diving for a ball at Comiskey Park in Chicago. He was traded to the Baltimore Orioles during the 1960 season and to the Kansas City Athletics in 1961 before closing his major league career with the Chicago White Sox in 1964 with a lifetime .240 mark.

Stephens, who attended the University of Arkansas, was employed for 21 years as a district manager for the Oklahoma City-based Kerr-Mcgee Refining Company, the largest offshore drilling company in the United States, before retiring in Grandbury, Texas.