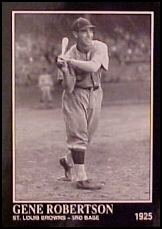 The most prominent major leaguer to come out of Saint Louis University, Gene Robertson was born in St. Louis, MO, and played much of his major league career with the St. Louis Browns. He was a 5' 7" third baseman who surprised when he hit 14 home runs in 1925 (good for 8th in the league), because in the rest of his years in the majors, he hit only 6 other home runs for a total of 20.

He was with the New York Yankees in 1928 and most of 1929. In 1928 he played almost as many games at third base as Joe Dugan, while in 1929 he played third more than anyone, although rookie Lyn Lary stayed at the position while Robertson was sold in the middle of September to the Boston Braves. In 1930, Lary moved to shortstop while Ben Chapman played third for the Yanks, and then in 1931 Chapman moved to the outfield while Joe Sewell played third.