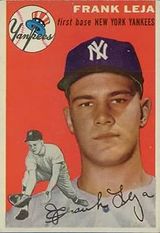 Frank Leja was projected as another Lou Gehrig by legendary New York Yankees scout Paul Krichell. Leja was the team's first bonus player in 1953 when he was signed for a reported $100,000. He worked out at Yankee Stadium and hit the first nine of ten pitches into the stands in home run territory. Little did anyone envision that his major league career would consist of only one hit.

Because of the bonus rule, the 17-year-old left-handed hitting first baseman languished on the bench during his first two years. Frank saw limited action, appearing in just 19 games and going 1 for 7 at the plate. Leja then spent several years in the minors and had possibly his best season in 1957 when he led the Eastern League with 117 RBIs and hit 22 homers to help the Binghamton Triplets to the league pennant. 1958 was also a good year when he hit for a .263 average with 29 home runs for the New Orleans Pelicans of the Southern Association. You could also say that 1961 was a very good year when he led the International League with 98 RBIs and hit 30 homers that was second only to Boog Powell and his 32 four-baggers.

Frank hung in there sticking out eight seasons in the minors and wound up with a minor league career batting average of .248 and 164 home runs. Leja did make it back to the majors for a seven-game trial with the Los Angeles Angels in 1962, going hitless in 16 at-bats. He was 1 for 23 in the majors, giving him a .043 batting average. Frank finished up his pro baseball career in 1963 at age 27 with the Toronto Maple Leafs of the International League.

Leja entered the insurance business in Nahant, MA and later was in the wholesale lobster business. He died of a heart attack on May 3, 1991, at age 55 in Boston, MA.