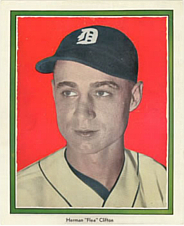 "The definite departure of the versatile Clifton will be accepted with a measure of regret by those who appreciate hustling abilities in an athlete. Clifton has no superior in aggressive spirit. To him a ball game, regardless of the state of the score, was always worthy of his best efforts." - Sam Greene, Detroit News, January 1938

Flea Clifton was a utility infielder for four seasons with the Detroit Tigers. He was pressed into service in the 1935 World Series when Hall of Fame slugger Hank Greenberg broke his wrist in Game 2. Third baseman Marv Owen moved to first and Clifton stepped in at the hot corner. He had only played in 43 games, a career best, during the regular season, hitting .255 with 5 doubles. He proceeded to go 0-for-16 with 2 walks and a run scored (Owen did not do much better after moving to first), but the Tigers managed to fight off the Chicago Cubs in six games.

While Clifton was actually born in 1908, his date of birth was listed as 1911 when he was active as a player. His father was killed at the Battle of Argonne Forest during World War I. When he was fifteen, his mother was murdered by a "friend" who choked her to death after drinking heavily. His mother had remarried, but his stepfather never liked young Herman and soon kicked him out of the house. He ended up living in a shed, scrounging for food, but still kept up his school attendance and played sports. In later years, he spent 40 years in the insurance business in his native Cincinnati, living to the ripe old age of 89.