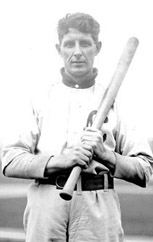 Fielder Jones found success as both a major league player and a manager.

Jones grew up in the small town of Shinglehouse, PA, close to the New York state border. He was named after an uncle, Civil War Union General Fielder Alsor Jones. He began to play amateur baseball on the town team, forming a battery with his brother Willard, a catcher. After earning an engineering certificate, Jones followed his older brother to Portland, OR where he began his pro baseball career in the Oregon State League in 1893. He then played for two years in the New York State League, with Corning in 1894 and Binghamton in 1895. When that league folded in mid-season, he was then picked up by Springfield of the Eastern League, for whom he hit .399 in 50 games.

He joined the Brooklyn Bridegrooms in 1896 and hit .354 as the team's regular rightfielder as a rookie, earning the job when John Anderson went down with an injury in May. He played five seasons with Brooklyn as the team won National League pennants in 1899 and 1900 playing for manager Ned Hanlon, who would be a great influence on his managerial style. From June 13 to September 7, 1899, Jones had a 70-games streak in which he reached base safely at least once. It is the longest known such streak in National League history; the longest ever is 84 by Ted Williams in 1949.

Prior to the 1901 season, Jones jumped to the Chicago White Sox of the new American League. He was a regular in the outfield for the Sox for eight seasons and hit over .300 in his first two years with the club. In 1901, he hit .311 and scored 120 runs as the White Sox claimed the AL's first pennant as a major league. During the 1904 season, he replaced Nixey Callahan as the team's skipper. He was generally regarded as one of the most intelligent field generals in the game, and in 1906, his charges upset a powerful Chicago Cubs team to win the World Series. The White Sox were known as the Hitless Wonders that year, because their .230 batting average as a team was the worst in the American League . However, they also led the league in walks and excelled at things such as bunting and stealing bases, in addition to having great pitching and defense. The team set a blueprint for how to play winning baseball in the Deadball Era and Jones was generally regarded as a managerial genius. 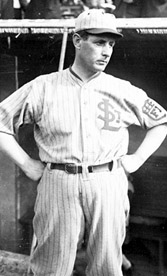 Frustrated by the team's narrow loss of the pennant in 1908 and owner Charles Comiskey's tight pockets, Jones retired after the season and went into the lumber business in the Pacific Northwest. He later returned to baseball as coach of what would later become Oregon State University and as player-manager of the Chehalis Gophers of the Washington State League in 1910 and then as President of the Northwestern League from 1912 to 1914.

Jones returned to the major leagues as manager of the St. Louis Terriers of the Federal League in 1914 (replacing Mordecai Brown). In 1915, he brought his team to within percentage points of the pennant. After the Federal League folded, Terriers owner Phil Ball bought the St. Louis Browns and brought Jones on to replace Branch Rickey as skipper. He remained with the club for two and a half seasons, before resigning on June 12, 1918, after a loss to the Washington Senators. The Browns of those days were notorious because a number of their players had a reputation for throwing games for money; one of its members in 1918 was infielder Joe Gedeon who would later be banned for life for his role in the Black Sox Scandal. Such shenanigans did not go down well with Jones, and detracted from some of his success as a manager.

After leaving the Browns behind, Jones never returned to organized baseball. He moved back to Oregon and for awhile was in the lumber and growing business in McMinnville, OR. He kept his love for the game and was active in promoting amateur baseball, and in fact was attending a booster club meeting when he was taken ill in February 1934. He died of heart failure a few weeks later and his funeral was attended by a number of baseball luminaries.