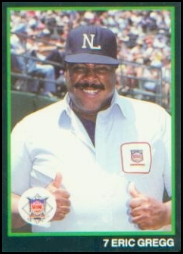 Eric Gregg was a National League umpire. He was on the full-time staff from 1978 until his resignation in 1999. He also worked eight games in 1976 and 77 games in 1977. He was the third African-American umpire in the major leagues, after Emmett Ashford and Art Williams.

Gregg, who called games in seven postseasons, including the 1989 World Series, is best remembered for his girth. At times, the 6'3" Gregg weighed in excess of 350 pounds. When fellow umpire John McSherry died on the field in 1996, Gregg made an effort to lose weight and was granted a leave of absence by the league in order to do so.

As an umpire, he was known for calling a very large strike zone, favorable to pitchers. He was the home plate umpire when rookie Livan Hernandez of the Florida Marlins struck out 15 Atlanta Braves batters in Game 5 of the NLCS on October 12, 1997, en route to a 2-1 complete game victory (Braves pitcher Greg Maddux struck out 9 batters in 7 innings in that game).

In 1999, Gregg was one of 22 umpires who resigned in an effort to get a new contract. He was not among the umpires later rehired by court order. Instead he was granted $400,000 in back pay when an agreement was reached to settle the issue in 2004. In the years before his death, Gregg operated a bar at Philadelphia's Veterans Stadium and made regular appearances at its replacement, Citizens Bank Park. He also served as a referee at 610-WIP's annual Wing Bowl Bacchanal. He died of a stroke in Philadelphia, PA on June 5, 2006.

For the 2007 season, his son Kevin was hired by the Phillies as a public relations assistant.