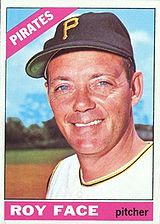 When Roy Face, who was usually called ElRoy when he was playing, served in the US Army after dropping out of high school. He signed as an amateur free agent with the Philadelphia Phillies before the 1949 season, he probably did not think he would still be pitching 22 years later. The Phillies assigned the right-hander to the Bradford Blue Wings of the class D PONY League and he wasted no time making himself known when he won 14 and lost 2 with a 3.32 ERA his first year out. They kept him there in 1950 and he turned it up a notch to 18-5 for a .783 winning percentage and a 2.58 ERA. Both his percentage and ERA led the league and put him on the All-Star team.

This display got Roy drafted by the Brooklyn Dodgers from the Phillies on December 4, 1950 in the minor league draft. Brooklyn assigned him to the Pueblo Dodgers in 1951, where he won 23 and lost 9 with a 2.78 ERA. Elroy's 23 wins led the Western League and he again was picked for the All-Star team. The Dodgers moved him up to the AA Fort Worth Cats of the Texas League in 1952, where he went 14-11 with a 2.83 ERA. The Pittsburgh Pirates then drafted him from Brooklyn in the 1952 Rule V Draft.

Roy was introduced to Forbes Field in 1953 and had for him a mediocre season, going 6-8 in 41 appearances with a 6.58 ERA. He was then sent down to the AA New Orleans Pelicans in 1954, winning 12 while losing 11 with a 4.45 ERA, which was just enough to get him back to the majors in 1955. Roy struggled and after a few seasons as a spot starter, he was converted into one of the premier relievers of the day. From May of 1958 until September of 1959, he made 92 trips in from the bullpen in between losses while winning an incredible 22 straight decisions, including his unprecedented 18-1 record in relief in 1959 for a .947 winning percentage. That 18-1 mark was the best for a pitcher's first 19 decisions in a season since Rube Marquard had started the 1912 season 19-0 for the New York Giants; the Brooklyn Dodgers' Don Newcombe had also gone 18-1 in his first 19 decisions of 1955, before finishing the year at 20-5. The only pitcher to repeat the feat since was Max Scherzer, who was also 18-1 after 19 decisions for the 2013 Detroit Tigers.

Generously listed at 5'8" and 155 pounds and gifted with a great forkball (a forerunner to the split-fingered fastball), Face won 10 games and had 24 saves for the 1960 pennant winners, and then had three saves against the New York Yankees in the World Series. A three-time league leader in saves, he topped the National League with 28 in 1962, the year he was named "Fireman of the Year"

Roy continued to build his reputation as the premier National League closer of the 1960s. His forkball was to the NL what Hoyt Wilhelm's knuckler was to the American League. From 1963 to 1968, Face had 68 saves and was considered one of the ten best relievers, according to The Relief Pitcher for being the most dominant reliever of his era.

On August 31, 1968 the Pirates announced the sale of Face to the Detroit Tigers. Following the announcement Roy was brought into one last game for the Pirates to pitch against one batter to give him 802 appearances for Pittsburgh, which tied him for the most games pitched with one team with Walter Johnson of the Washington Senators. The appearance came in the 1st inning as starter Steve Blass moved to the outfield for one batter.

Roy concluded his career the following season. When Detroit released him on April 3, 1969, Face chose to sign with the Montreal Expos on April 27th, and played with Montreal until late August, winning 4 and losing 2 with 5 saves and a 3.94 ERA at 41 years of age. This gave Roy a major league career mark of 104-95 and 193 saves in 848 games. No one has ever played for Montreal in both the minors and majors, but Roy came closest. He was on the Montreal Royals' roster when drafted by the Pirates in late 1952, although he never pitched for the team, and then pitched for the Expos in his final season - the team's first in the majors.

After his major league career ended, Face went back to the minors with the Hawaii Islanders in 1970, appeared in eight games with no decisions. This did finally conclude his 22 active seasons, from 1949 to 1970, in organized baseball.

A member of the Carpenter's Union from the time he first came to the majors, as of last word, Roy is now retired in North Versailles, Pennsylvania, after working as a carpentry foreman at Mayview State Hospital.