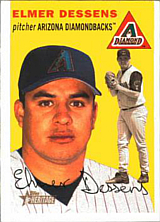 Elmer Dessens played 14 seasons in the majors, as well as in Mexico and in Japan.

Born in Mexico, Dessens was signed as a non-drafted free agent by the Pittsburgh Pirates in 1993. By 1996 he was up to AAA and came to the majors for 15 games with the Pirates.

In 1999 he pitched for the Yomiuri Giants in Japan and also for Hermosillo in the Mexican Pacific League.

Dessens won the final game of the 2008 Mexican League finals to give the Mexico City Red Devils their 15th title; he allowed one run in 8 innings that day and finished the playoffs 3-0. After the playoffs ended, he was signed to a contract by the Atlanta Braves, making his first appearance with the team in late August of 2008.

Dessens was the captain of Mexico's team in the 2009 World Baseball Classic and one of their best pitchers, going 1-0 with a 1.35 ERA and getting the win over South Africa. He pitched for the New York Mets in 2009 and 2010.