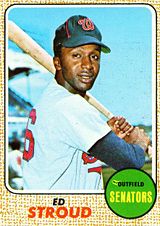 Stroud was born in Lapine, AL, south of Montgomery, AL. Signed by the Chicago White Sox in 1963, he spent six years in the minors, hitting .308. When he hit .309 with 57 stolen bases for the Indianapolis Indians in 1966, he got his major league chance. Stroud also acquired his nickname - "The Creeper" - with Indianapolis that year. As Edgar Munzel wrote in the October 1, 1966, issue of The Sporting News, it was "because of a narrow-brimmed, dark green hat he wears and the hunch-shouldered walk that makes him look like he's sneaking up up on somebody."

Ed hit only .167 in his first cup of coffee but the next year when he hit .296 in 20 games he was traded in June 1967 to the Washington Senators for longtime Senator Jim King. Ed became the centerfielder for the team, getting almost as many innings in half a season at the position as Fred Valentine did during the entire season (Valentine also played a lot at the other outfield positions). Hank Allen, Dick Allen's brother, also appeared a lot in center field that year for the team.

From 1968 to 1970, Stroud played over 100 games for the Senators each year. Although his averages may not look impressive, it was the second dead-ball era and averages were in general very low. In 1968 his .239 average was 15 points above the team average of .224.

Ed finished out his major league career back with the Chicago White Sox in 1971.

The New Bill James Historical Baseball Abstract mentions that Stroud once had his jaw broken by a pitch.

Hank Allen stated that the black players, including Stroud, did not feel comfortable in 1968 with the Senators, but that in 1969, under new ownership and with manager Ted Williams, things had changed. Source: Jet Magazine, April 24, 1969 (the magazine also has a photo of Williams standing with Stroud, both of them wearing big smiles).