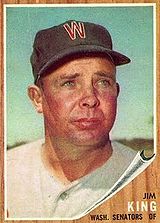 Outfielder Jim King played eleven seasons in the big leagues, hitting with some power. Although he never had 500 at-bats in a season, he reached double figures in home runs in eight seasons.

King began his pro career as a 17-year-old with the Vernon Dusters of the Longhorn League in 1950, hitting .302 with 12 homers. He was then sold to the St. Louis Cardinals, playing four years in their organization. After hitting .314 with 25 home runs for the Omaha Cardinals in 1954, he was selected by the Chicago Cubs in the Rule V draft. He spent two summers in the majors with the Cubs, hitting 11 homers in 1955 and 15 in 1956.

King was traded back to the Cardinals prior to the 1957 season but spent most of that year in the minors with Omaha. He was then dealt to the San Francisco Giants the following spring but only hit .214 in 32 big league games. After spending 1959 in the minors, he was acquired by the Cleveland Indians for the 1960 season. He spent that entire campaign with the Toronto Maple Leafs (where one of his teammate was Sparky Anderson, hitting .268 with 20 home runs en route to being named International League MVP.

Following his success with Toronto, King was taken by the Washington Senators in the 1960 expansion draft. Over the next six years, he saw consistent playing time in the nation's capital, hitting double figures in home runs in each season. He had his best year in 1963, hitting 24 homers while driving in 62 runs. He was traded to the Chicago White Sox for Ed Stroud during the 1967 season, and about a month later, he was dealt to the Cleveland Indians for Rocky Colavito.