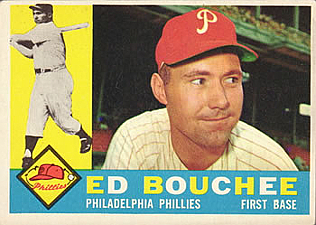 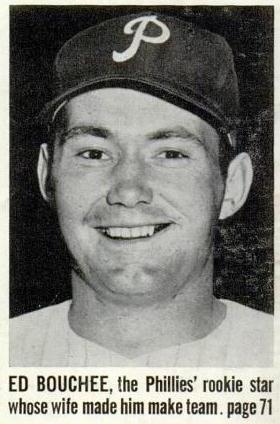 First baseman Ed Bouchee played seven seasons in the majors. He began his career with great promise, finishing second in the 1957 NL ROTY vote, but following some off-field legal problems, he was out of the majors by his 30th birthday.

A rare Montana-born major leaguer, Bouchee moved with his family to Spokane, Washington during World War II. After one year at Washington State, he began his pro career with the Spokane Indians of the Western International League in 1952, hitting .319 in his rookie season. He then spent two years of service in the U.S. Army during the Korean War and was purchased by the Philadelphia Phillies prior to the 1955 season. With the Schenectady Blue Jays that summer, he hit .313 with 22 home runs. The following season, 1956, he posted a .294 average while hitting 17 homers for the Miami Marlins of the International League. He earned a late-season call-up to the majors that fall, hitting .273 in 9 games for the Phillies.

Bouchee became Philadelphia's Opening Day first baseman in 1957 and hit .293 with 17 home runs and 76 RBI while appearing in all 154 games. He was runner-up to teammate Jack Sanford for Rookie of the Year and earned top National League rookie honors from The Sporting News. During the offseason, he was arrested and charged with indecent exposure after he exposed himself to young girls. He pleaded guilty, underwent psychiatric counseling, and rejoined the Phillies in July 1958. After a subpar partial season, he bounced back to hit .285 with 15 homers in 1959.

Bouchee was traded, along with Don Cardwell, to the Chicago Cubs on May 13, 1960, in return for Tony Taylor and Cal Neeman. He hit a combined .242 that season, and in 1961, he managed only a .248 average, along with a dozen home runs. Following a year and a half in Chicago, he was selected by the New York Mets in the expansion draft. He was used sparingly by the first year club in 1962, getting into only 50 games and hitting just .161. He spent the rest of the summer with the Syracuse Chiefs of the International League, hitting .287 in 80 games. The next season, 1963, he hit .266 with 14 homers in 87 games for the Buffalo Bisons before ending his baseball career.

Following his baseball days, Bouchee lived for many years in Des Plaines, Illinois, and worked in management for AC Delco. He later retired to Gilbert, Arizona. He died in 2013 at age 79.