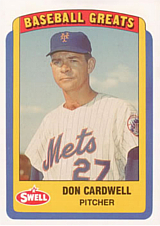 “Fans streaming onto the field... Don Cardwell has just thrown a no-hitter in the most fabulous break-in for a pitcher in the history of baseball just joining a club.” - Jack Brickhouse, following Don's Cubs debut, in his May 15, 1960 broadcast

Pitcher Don Cardwell signed with the Philadelphia Phillies in 1954 and reached the majors with the team in 1957. He spent a little more than three years with them, mostly as a part of their starting rotation, before being traded to the Chicago Cubs early in the 1960 season in the deal that brought Tony Taylor to Philadelphia. In his first day out as a Cub, on May 15th, he calmly went out and pitched a no-hitter, striking out 7 while only issuing a walk to Alex Grammas in a 4-0 victory against the St. Louis Cardinals at Wrigley Field. With the Cubs in 1961, he enjoyed perhaps his best big league season, winning 15 games with a league leading 38 starts and striking out 156 hitters in 259 1/3 innings.

Following the 1962 season, Cardwell was traded to the St. Louis Cardinals, who in turn sent him to the Pittsburgh Pirates a month later. Despite a tough luck 13-15 record in 1963, he had a terrific 3.07 ERA in 213 2/3 innings. He enjoyed another 13-win season in 1965, with a 3.18 ERA in 240 1/3 innings. He moved to the New York Mets as part of a deal for Dennis Ribant and Gary Kolb after the 1966 season and was a member of the starting rotation for the 1969 Miracle Mets that won the World Series. During their battle to a division title, when they won 38 of their last 49 regular season games, Cardwell won 4 of 5 decisions with a 1.53 ERA. He ended his career with the Atlanta Braves in 1970.