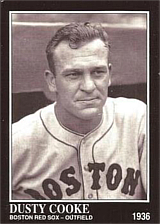 "When I saw him, I knew he was the ballplayer I had been dreaming about. He had everything. A big guy and strong... and he could run like a deer. He could hit and throw and he could go and get the ball in the outfield." - Paul Krichell, legendary scout for the New York Yankees

Dusty Cooke played eight years in the big leagues, showing an ability to draw walks. Had it not been for a broken collarbone and a fractured leg during his playing days, he might have seen greater success as a pro. He hit .306/.400/.439 in 294 at bats for the Boston Red Sox in 1935, with his on-base percentage among the American League leaders that year. The following season, in 341 at bats, he posted a .273/.401/.402 line, drawing 72 free passes. He played outfield in the majors, appearing in all three outfield positions in roughly equal amounts. Although he was with the New York Yankees for parts of three years, he never appeared in postseason play.

He joined the Navy in October 1942, and trained as a pilot at Chapel Hill, NC with Ted Williams, where he played ball with the base's Cloudbusters team.  Cooke served in Okinawa Bay during the war and received training in the Navy in conditioning, so he became the trainer for the Philadelphia Phillies in 1946. Cooke was a Phillies coach from 1948 to 1952 and was also the club's manager for a short time in 1948.