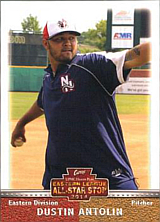 Relief pitcher Dustin Antolin made his professional debut in 2008 at 18 years old. He was taken by the Toronto Blue Jays in the 11th round of the 2008 amateur draft, a couple of picks after pitcher Nathan Eovaldi and ahead of pitcher Michael Stutes.

After five seasons, he had not advanced above Advanced A ball, despite posting some impressive statistics. In 2010, he had a 2.93 ERA in 18 relief appearances for the Lansing Lugnuts and the next year averaged 10.3 strikeouts per nine innings for Lansing and the Dunedin Blue Jays. In 2013, he reached the mid-minors for the first time, with little success (11.41 ERA in 26 games), though he improved his ERA to 3.38 at Double A in 2014 and to 3.07 in 2015. He was an Eastern League Mid-Season All-Star in 2014.

After starting 2016 off well with the Triple A Buffalo Bisons, Antolin earned his first promotion to the major leagues. He debuted on May 16th for the Blue Jays against the Tampa Bay Rays, allowing a walk, four hits and three earned runs in two innings of work. He surrendered a home run to catcher Curt Casali. To date, it remains his only big league appearance.