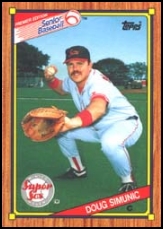 Catcher Doug Simunic was selected by the Montreal Expos in the 1975 amateur draft. He played in the minor leagues for almost a decade in the Expos, Cleveland Indians, and Seattle Mariners organizations and hit .248 with 61 homers in 715 games. He was also a player/coach for two seasons in the Italian professional league.

Simunic went on to coach in the Houston Astros and Los Angeles Dodgers organizations. In 1993, he became manager of the Rochester Aces of the Northern League. The next season, he joined the league's Winnipeg Goldeyes, managed them for two seasons, and won one league championship. In 1996, he became manager of the expansion Fargo-Moorhead RedHawks of the Northern League. In his first 12 seasons with the club, he led them to 11 playoff appearances and five championships, but success was harder to come by after that. Simunic has been named Northern League Manager of the Year four times.

On August 13, 2017, he was fired in his 22nd year on the job, having won 1,202 games for the club. Pitching coach Michael Schlact replaced him on an interim basis to complete the season. In 2019, he joined the Ottawa Champions of the Can-Am Association as Director of Player Procurement.

Simunic was a Team USA coach in the 2003 Baseball World Cup.