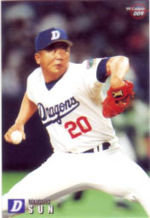 Dong-yeol Sun was arguably the greatest pitcher in the history of the Korea Baseball Organization, leading 8 times in ERA, five times in wins and strikeouts and twice in saves, winning the Korea Baseball Organization MVP award three times. He then starred for four years in Nippon Pro Baseball with the Chunichi Dragons. After his playing career ended, Sun worked for the KBO and as of 2007, manages the Samsung Lions.

Sun joined the Korea University baseball team in 1981. He was the MVP of the 1982 Amateur World Series, with a 0.00 ERA (tying teammate Ho-kyun Lim for the lead). He helped the South Korean national team to its only title in the event in the 20th Century. Through 2006, it was the most recent Amateur World Series or Baseball World Cup (the name soon adopted) not won by Cuba. Cuba had sat out the 1982 tournament. After college, he played in Korea's industrial leagues.

Sun was named the All-Star pitcher in the 1983 Intercontinental Cup, which he led with 31 innings pitched. He was the only All-Star chosen from a team that did not make it out of the first round.

In 1991, the 28-year-old superstar went 19-4 with six saves and won his fifth Triple Crown, thanks to a 1.55 ERA and 210 strikeouts in 203 innings. It was his 7th consecutive ERA title. Haitai won their fifth title with Sun. While he had claimed five pitching Triple Crowns in six years, it would be 15 years until the feat was done again in the KBO, by Hyun-Jin Ryu.

Sun holds the KBO record with 18 strikeouts in an extra-inning game. He was shared for the most whiffs in a 9-inning game (16, tied with Dong-won Choi and Dae-jin Lee) until Hyun-jin Ryu broke it in 2010.

Dong-Yol became the first KBO star to jump to Nippon Pro Baseball in 1996 when he signed with the Chunichi Dragons for 300 million yen.

In 1998, Sun had a 3-0 record with 29 saves, finishing second to Sasaki in saves in the CL. He had a 1.48 ERA and gave up 31 hits and 11 walks in 48 2/3 innings while striking out 58. That year, Chunichi had three Koreans on their roster as Jong-Beom Lee and Samson Lee were signed as well. The group became known as the "Three Korean Musketeers."

After Sun finished up with Chunichi, the Boston Red Sox pursued him but the two couldn't come to a deal and Dong-Yol finished his pro career with a 156-44 record and 230 saves.

He was then hired by the KBO as a PR adviser, going to schools and opening youth baseball clinics.

In 2003, he was offered a job managing the Doosan Bears but instead took the role as head coach of the Samsung Lions under manager Eung-Yong Kim. Kim retired after 2004 and Sun was promoted to the helm. Samsung went 74-48-4 and they won their third Korean Series. Three of the KBO managers of that year had been teammates in 1981 at Korea University. Samsung repeated in Sun's second year at the reigns.

Sun coached for South Korea in the 2007 Asian Championship and the 2008 Olympics, when they won Gold. After managing South Korea to Gold in the 2018 Asian Games, he stepped down amid controversy that he had picked less-qualified players who needed the military exemption that came with a medal rather than the top KBO performers.