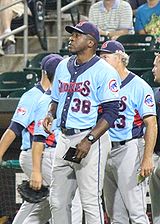 Desi Wilson is one of two major league players to come out of small Fairleigh Dickinson University (Mike Laga was the other). He played in the major leagues for the 1996 San Francisco Giants, making his debut on August 7th, and hitting .271 in 118 at-bats while playing first base. The next year J.T. Snow took over first base and kept it for years.

He got his shot at the majors in 1996 when he hit .339 in the Pacific Coast League for the Phoenix Firebirds. The following year he hit .344 for them.

Although Wilson played only one year in the major leagues, he played 17 seasons in professional baseball. After 2002, he primarily played independent baseball. He tended to have high batting averages but did not have a lot of power.

In independent ball in 2005, he hit .411 for the Surprise Fightin' Falcons of the Golden Baseball League. At age 37 in 2006, he played in the same league for Chico, hitting .333. He retired after the season to became manager of the Anderson Joes of the newly-formed South Coast League. The team did badly in the first half, going 13-32, and 8 games into the second half, he gave up the manager's job to resume playing, hitting .366 in 22 games. He was later traded to the South Georgia Peanuts and was a member of their championship-winning team.