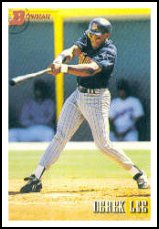 Outfielder Derek Lee is not to be confused with All-Star first baseman Derrek Lee, who reached the majors a few years after Derek Lee's only taste of the major leagues, with the Minnesota Twins in 1993.