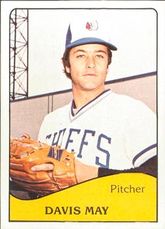 In 1977, pitcher Davis "Dave" May made the Opening Day roster of the Minnesota Twins, but an option technicality forced the Twins to return Jim Hughes to the roster and May to the Triple-A Tacoma Twins.

Near the end of April, the Twins called up May and another pitcher, Jeff Holly, after pitchers Don Carrithers and Mike Pazik were injured in a car accident. Holly appeared in 39 big-league games from 1977 through 1979. May never did appear in the majors. He was sent back to Tacoma on May 16th when Glenn Adams, who had been out with a broken wrist, returned. The idleness hurt May, and he had a poor season at Triple-A. His minor-league career continued through 1980 without another call-up.

This page is in need of some additional content. Please help the Bullpen by expanding it, or learn how to contribute.
Retrieved from "https://www.baseball-reference.com/bpv/index.php?title=Dave_May_(minors)&oldid=912937"
Categories: