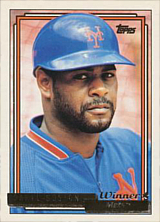 Daryl Boston was an outfielder with an eleven-year career who broke into the major leagues at the age of 21.

Many people expected that Boston, as a first-round draft pick with considerable talent, would develop into a major league star. It was not to be. An interesting comparison is Darrin Jackson, a contemporary of Boston who also played the outfield for the White Sox for a while, and who is one of the most similar players to Boston based on similarity scores.

His brother, D.J., played in the minor leagues for several seasons.