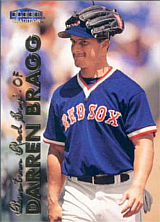 Darren Bragg was one of only three players from the 1991 22nd round draft class to make the major leagues, and the only member of that group to post a positive career bWAR. He saw his most extensive big league action as a member of the Boston Red Sox, batting .257 with 9 home runs in 153 games as a regular outfielder in 1997. In international play, he batted .448/.485/.586 with 9 runs scored in 7 games as the right fielder for Team USA in the 1990 Baseball World Cup. He also was with the US for a Bronze in the 1990 Goodwill Games.

Bragg was hitting coach of the Dayton Dragons in 2007 to 2008. From 2009 to 2018, he was the minor league outfield coordinator for the Cincinnati Reds when the firing of big league manager Bryan Price on April 19th led to a domino effect throughout the organization. He was asked as a result to step in as bench coach of the AAA Louisville Bats for the rest of 2018. He was bench coach of the Chattanooga Lookouts in 2019. He was scheduled to be bench coach for the Daytona Tortugas in 2020 before the season was cancelled due to Covid-19. Bragg was development coach for the Dayton Dragons in 2021.