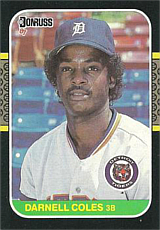 Obtained by the Detroit Tigers for the 1986 season, Darnell Coles was a star on the rise when he pushed Tom Brookens off third base and batted .273/.333/.453 with 20 home runs, 30 doubles and 86 RBI in 142 games. He would never soar that high again, spending time with eight teams over the next ten seasons, largely as a bench bat and utility man. He is the father-in-law of Zack Segovia, who pitched with the Philadelphia Phillies.

Following his playing days, Coles did color commentary for ESPN during the Asian portion of the 2006 World Baseball Classic, then took a job as the Washington Nationals roving hitting instructor. He managed the Vermont Lake Monsters in 2007 and the Hagerstown Suns in 2008, then was the hitting coach of the Syracuse Chiefs in 2009. In 2010 and 2011, he was the Milwaukee Brewers' minor league hitting coordinator; he then spent a couple of seasons managing the Huntsville Stars, the Brewers' AA affiliate. In 2014, he was appointed to his first major league coaching job, assistant hitting coach of the Detroit Tigers. He replaced another former Pirates outfielder, Lloyd McClendon, but stayed in the job for only one season. In 2015, he was appointed hitting coach of the Milwaukee Brewers, staying until the end of the 2018 season. In 2019, he moved to the Arizona Diamondbacks as hitting coach. He was fired on June 10, 2021, alongside assistant hitting coach Eric Hinske, with the team mired in a deep slump.